Barton Community College is governed by a six-member board of trustees elected from Barton County and coordinated by the Kansas Board of Regents. Three positions on the board come up for election every two years (odd-numbered years; i.e. 2009). The terms are four years. You must be a resident of Barton County to be a trustee. You may file for a trustee position by appearing in person at the Barton County Clerk’s office by the deadline established by that office and paying the required filing fee of $5. Your name will be placed on the ballot for the November election of that year. Newly elected trustees take office the following January.

Learn more about the Board of Trustees' responsibilities. 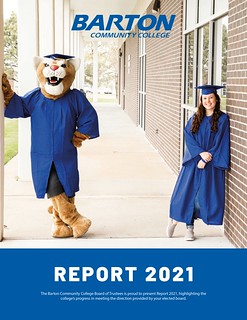 The Barton Community College Board of Trustees is proud to present the Community Report, an annual publication highlighting the college's progress in meeting the direction established by your elected board.
More than 250 copies of the publication are sent to school boards, county commissions and city councils in the college's state-designated seven-county service area, and our state and national elected officials' offices.
It is also distributed at college functions throughout the year.
To request a hard copy use the form at report.bartonccc.edu.